The last year was a busy one for the Microbestiary! With so many new partnerships and exciting activities, we’ve decided to start our very own Bestiary Blog! Welcome to our inaugural post, “The Year in Review”.

As a quick introduction, the Microbestiary strives to show that microbes are just as charismatic and engaging as megafauna. Through the combination of science, art, and education, we design projects that show the public that microbes are more varied and important than they are often given credit for. You can find out more on our “About” page.

The Microbestiary team has added a few new members. Second-year Masters students Sara Griffith and Emily Armitage, and current graphic design post-baccalaureate Rebecca Austin were welcomed and joined current Project Coordinator and Outreach Consultant, Erin Bentley. With their help, we have been able to expand beyond the website and into local classrooms, the farmers’ market, and even we started collaborations with local businesses.

Ever Build-a-Bear? How about Build-a-Beast? In the fall of 2018 and January of 2019 the Microbestiary worked with UW’s Lab School to teach an elective course for the middle school. Entitled “Build-A-Beast”, the class focused on teaching that microbes embody more than disease causing agents, and are just as charismatic and engaging as the beasts found in the classical bestiaries. Students designed their own microbes after learning about everything from microbial diversity to organelle function, including the types of environments they lived in and the sources of energy they utilized. After building their microbes, participants described the environments their beasts lived in, what they ate, and finished out the class with a “War of the Microbes,” talking about how their microbes might interact with one another in the environment. Finally, the newly designed and named microbe bestiary entries were compiled in a class yearbook which included their own signature names (following the rules of binomial nomenclature) and a representative picture drawn by the student taxonomists themselves. 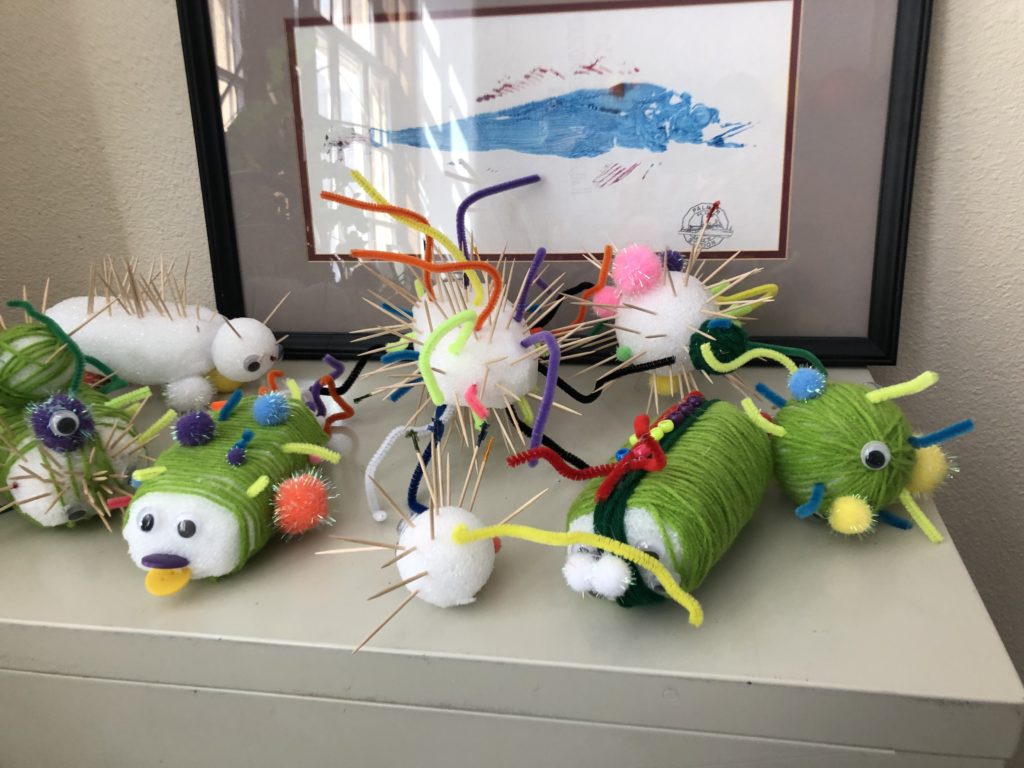 In the summer of 2019 the bestiary hosted a booth in the local Undine Park Farmers Market. We provided free activities for kids that involved the building of Winogradsky columns and a project that we dubbed “microbial sun-catchers” (pictured below). Winogradsky columns are miniature ecosystems made of mud, water, and a carbon source. After some time in the sunlight, the mud in the column will change colors as microbes begin to utilize the remaining oxygen (or thrive in the lack thereof). While the Winogradsky column showed that microbes play in important role in a larger ecosystem, the sun-catchers showed that they also contain different unique organelles that they can utilize to help them survive across vastly different environments. Over the course of the three weeks that we attended the market, the Microbestiary engaged with over sixty children from the local Laramie community! 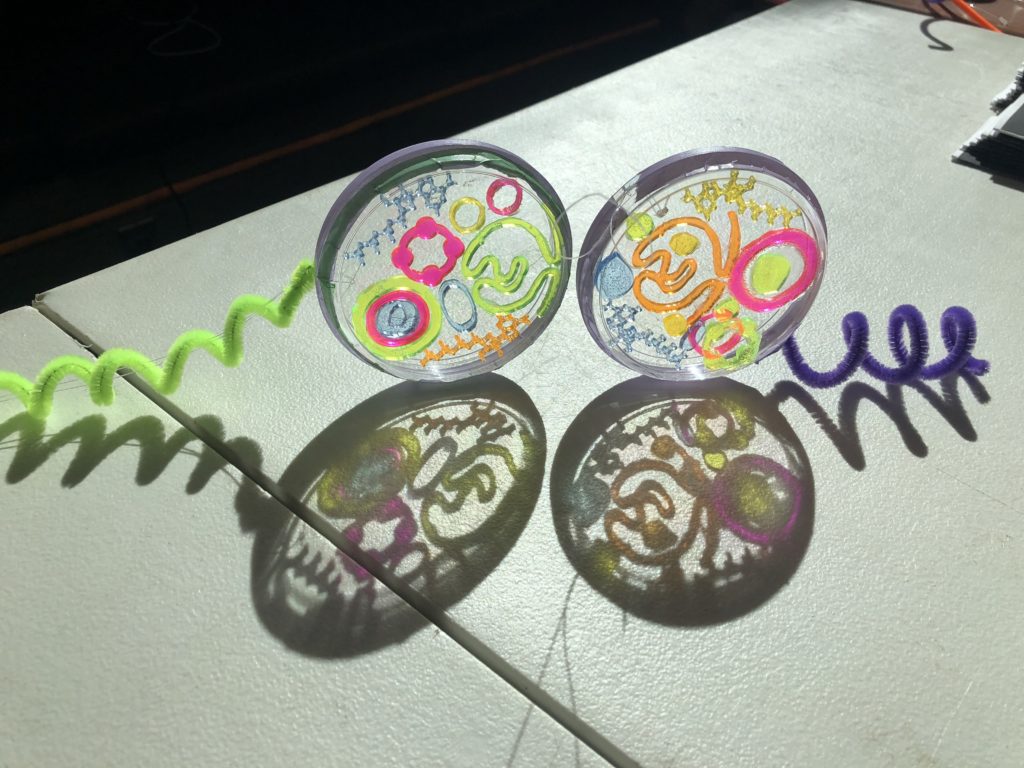 In addition to the time at the market, the Microbestiary hosted a condensed Build-a-Beast class through the nonprofit Science Loves Art (SLA). With a small class of six kids, we had them build 3D models of microbes, providing them with different craft items that represented various structures of microbial cells including photosynthetic membranes and transport proteins.

Finally, the Microbestiary has partnered with the local business Laramie Soap Co. to make a soap that represents the microbial membrane, lipid bilayer and all. We’re very excited about this collaboration, and will post pictures as soon as we have them! You can find Laramie Soap Co. at their website (https://www.wildbeautyandtheelementalman.com/), or on Facebook and Instagram.

In the Dark Room and Beyond

Over the last six months, our resident artist, Rebecca Austin, has been working hard. She is responsible for laser cutting organelles for the sun-catchers, drafting posters, communicating with artists, and engaging in two independent studies in graphic design and photography focused on Microbestiary projects.

For the graphic design independent study, the end goal was to create an Augmented Reality (AR) application for mobile devices showcasing the different microbial cells featured on the Microbestiary website. A prototype application was created on a desktop computer and work is continuing on making it work on mobile devices, which has proved to be more difficult. The goal is that users will be able to take a specifically designed microbe card that was created in Adobe Illustrator, that features information and an image for each different microbe, and hold it up to the camera on the computer. The information then creates 3D models that hover over the card and are animated, allowing users to experience microbes in a three-dimensional form. Over the next semester, we plan to work to make this functional as an app.

For the photography independent study, Rebecca created images of microbes through the chemigram process. The chemigram process includes using expired photosensitive paper and a certain combination of chemicals, those used in the development process for black and white photos, to “paint” an image onto the paper. She created vector images of certain microbes that are featured on the Microbestiary website on Adobe Illustrator which she then printed out onto chipboard using a laser cutter. From there the cutouts were dipped into the chemicals in the chemigram process and placed on the photo paper in different ways to create different effects and compositions. Afterwards, the images are all scanned at high resolution and are printed out to create a book containing the images of microbes along with information about them. The book will be forthcoming within the next few months. In addition, one of her chemigrams was accepted in the Annual Juried University of Wyoming Student Exhibition!

This piece was accepted into the Annual Juried Student Exhibition

Over the last two years, the Microbestiary has been in the process of developing a video game with the Energy Innovation Center’s Shell 3D Visualization Center to teach about bacteriophage invasion of microbial cells and cellular defenses in a format that is engaging to a younger audience. Game development and design has been largely done by two technological associates for the Shell 3D Visualization Center, Erik Horwitz, and Alexandra Krosley. We have moved on to Beta testing for the game, so keep an eye out for updates and release information!

It’s been a busy year for the Microbestiary, and we are grateful for the help of all of our collaborators, those mentioned here and those that have contributed in other ways, including new additions to the website. Moving into 2020, new activities abound; including new and continuing outreach to Laramie Public Schools, expanding our offerings at the farmers’ market, completing the development of the AR mobile app, and the publishing of our microbe book.

As our team continues to expand, we are excited to grow our services to the community of Laramie and beyond!

Check back soon, and thank you for your interest and support!

Erin Bentley and the Microbestiary Team